This year my winter steelheading goal was to explore rivers I had never fished and spots I had only been to a couple times. And Sunday was no exception.

My early morning drive got me thinking about my game plan. The radar reports from the night before informed me I had at least 3 or 4 hours until I could expect rain, which meant I wouldn’t need my jacket until later in the day. Awesome. Second, it was Sunday which meant it could very well be a busy day on the river. Both of these points to consider were entered into my mental play book and I motored on.

With a strategy in mind and my expectations set, I arrived at “the river of the day,” all wadered up and ready to roll. I grabbed my gear and headed towards the water. I worked down the river for about an hour before it started to rain. Not shower. But rain. Guess the radar didn’t get a good read on the canyons. So I back-tracked to the truck for my jacket, considered my expectation for rain later in the day a wash, and continued to work my way down the river for the next few hours.

Around 1pm, the clouds broke and clear skies took their place. A kingfisher blue and chartreuse pick-‘yer-pocket was my fly of choice. Not a typical selection of mine, but I felt like trying something different. Still working downriver, I swung across a submerged rock and BOOM my fly was hit at full speed. It was ballistic. I had a feisty one. He was jumper that took a lot of line and put up a good fight. THIS is the steelheading I live for. After a brief battle, I got him in and was able to admire all the awesomeness that is a wild steelhead.

Wow, what a damn cool fish. I thanked him for the opportunity to share a brief moment in time together and let him go. 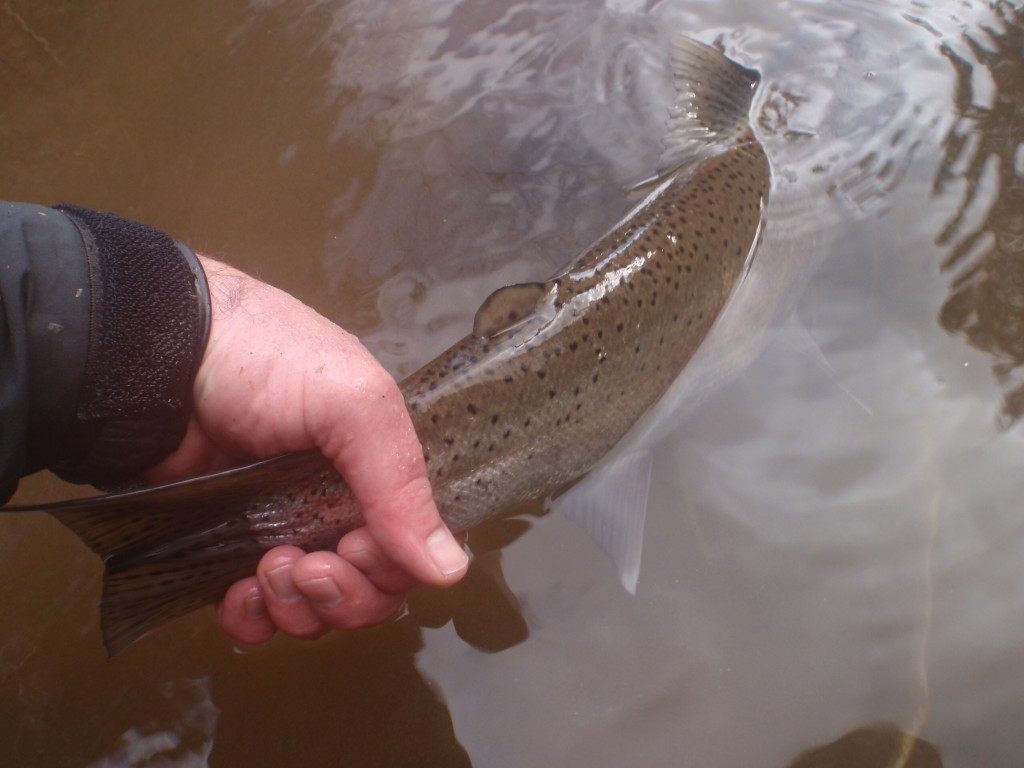 Feelin’ good, I headed back to the truck to explore more of the river. I fished a few places but didn’t have any luck. I almost skipped my final spot because it had most likely been fished all day and I honestly expected to see a least one individual there. But to my surprise, I did not see a single person when I drove past. Works for me! I parked the truck and headed down. Halfway through the run, my pink pick-‘yer-pocket swung over a basalt ledge on the other side of the river. It was then that I saw the flash and my line went tight. My first thought was, “Two fish?! Hell yeah!” This hen was bulldoggy. She’d go deep, get in the current and peel off some line, I’d get her back swimming towards me and we’d go another round. We probably did this dance 3 or 4 times before I could get her in. 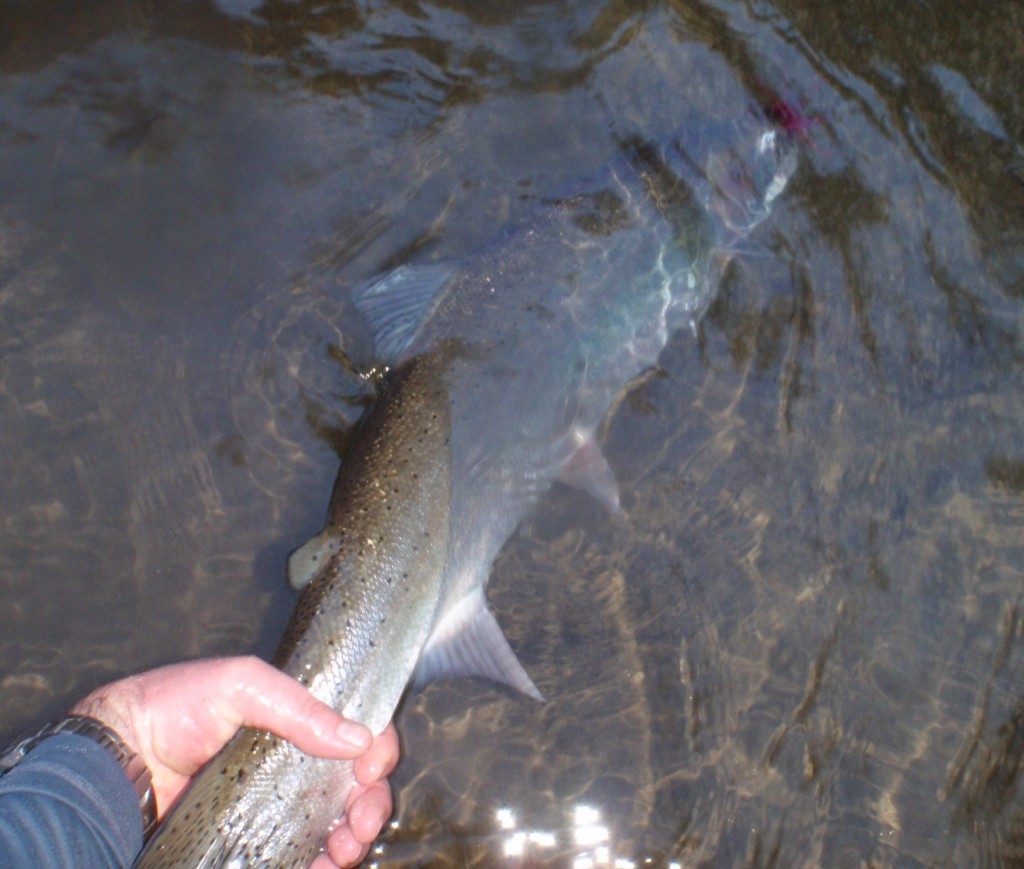 I quickly snapped a few pictures, paid my respects and let her go. Catching a fish in water that had been fished all day is a pretty cool feeling, I tell ya. 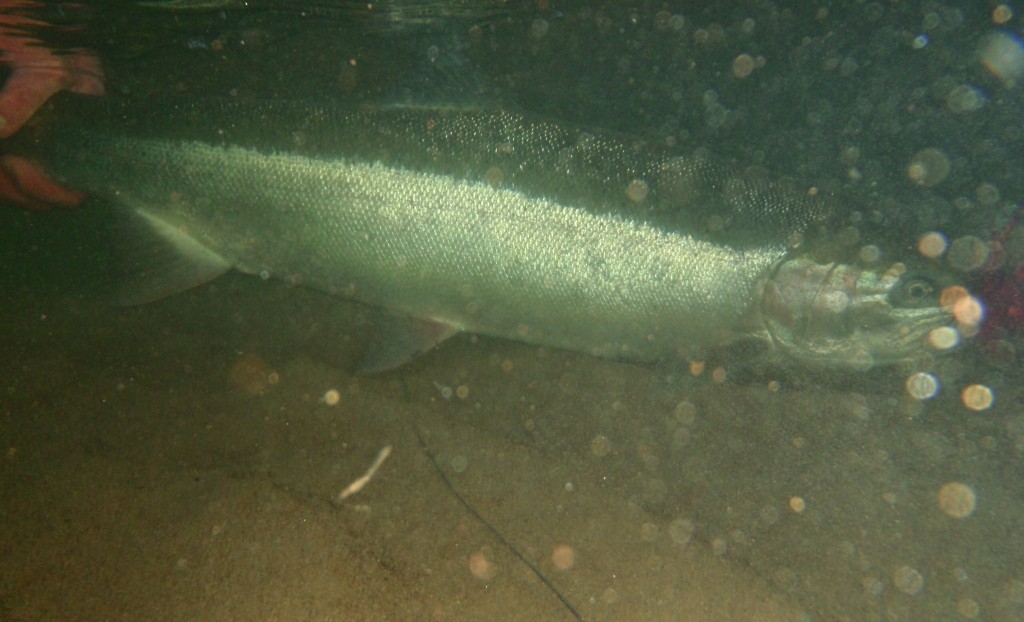 By that point I was pretty content to be done for the day, but I couldn’t leave having not fished the rest of the run. That has to be some sort of bad fishing juju, right? So, after a short break and some relishing in my now, 2-steelhead day, I started to fish the rest of the run. A few casts in to that, I was surprised to get another grab as I was stripping line in to make a cast. Was this really going to be a 3 steelhead day?!

No. No it wasn’t. And that was fine with me. It was then that I decided to call it a day. I changed out of my gear, grabbed a beer and headed back down to the river to relax. I ended up at one of the local watering holes with, well, a few of the locals hanging out in the river. I took my place on a downed log and watched them do their thing. Not sure if this local was maddoggin’ me to leave or was coming over to say hello. 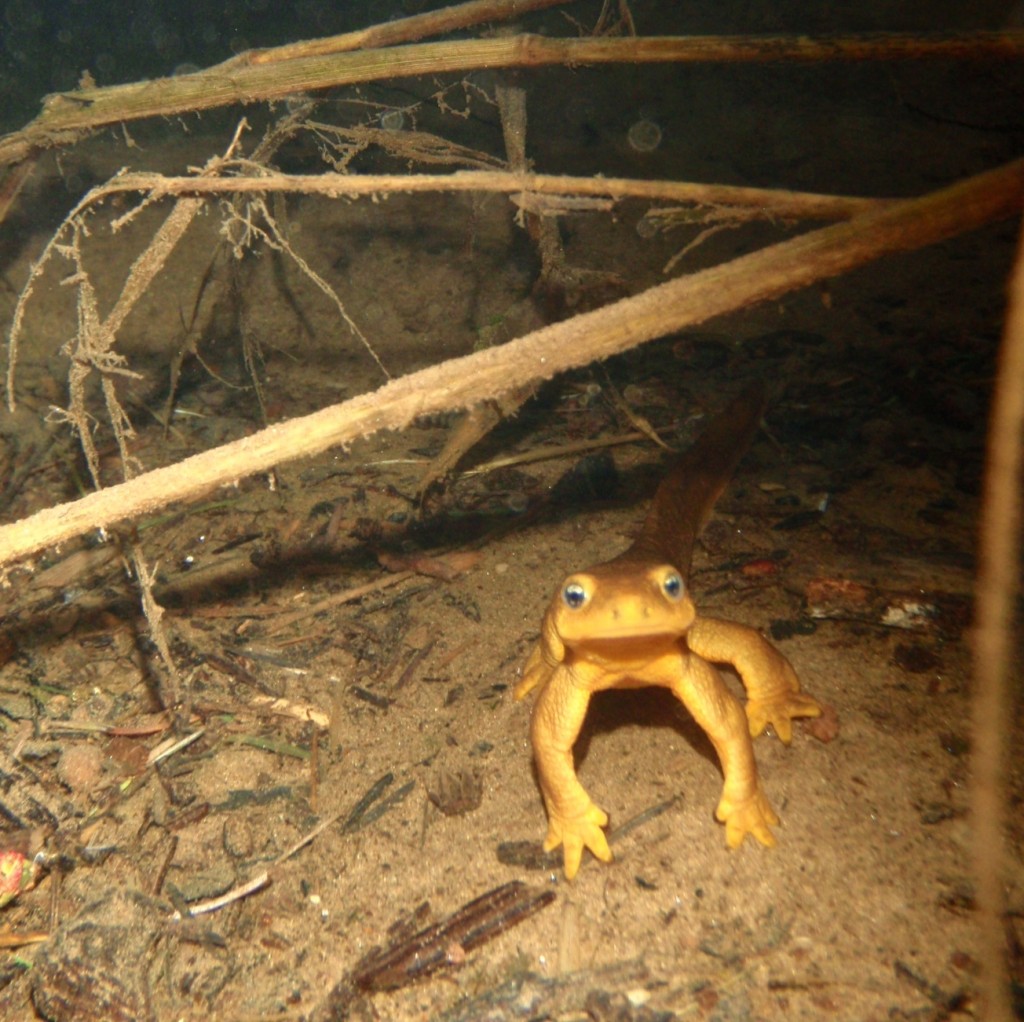 Overall, it was another great day in the Pacific Northwest. I’ve been able to get in more winter steelheading this year as opposed to last year and it’s been a real treat. Fish or no fish, I still marvel in the beauty and surprises the Pacific Northwest offers, and I continue to feel grateful for the opportunity to be a part of this special place. Thanks, Oregon.