I got a chance to spend a few days with the much vaunted OPST Commando Head on my switch rod. These heads have caused quite a stir in the two handed fishing world. The Commando starts at 150 grains, 12’ in length and jumps in 25-grain increments to 475 grains and 18’. The lighter weights are designed to be fished on single hand rods with skagit style casts. Rio and Airflo also have their own versions of this super short skagit head.

I used two different heads on my 10’ switch rod—the 350 and 375 grain, both coming in at 15’.  These heads are 5’ shorter than the skagit switch head I’m accustomed to using on this particular rod. That’s a 25% reduction. Quite a chunk! 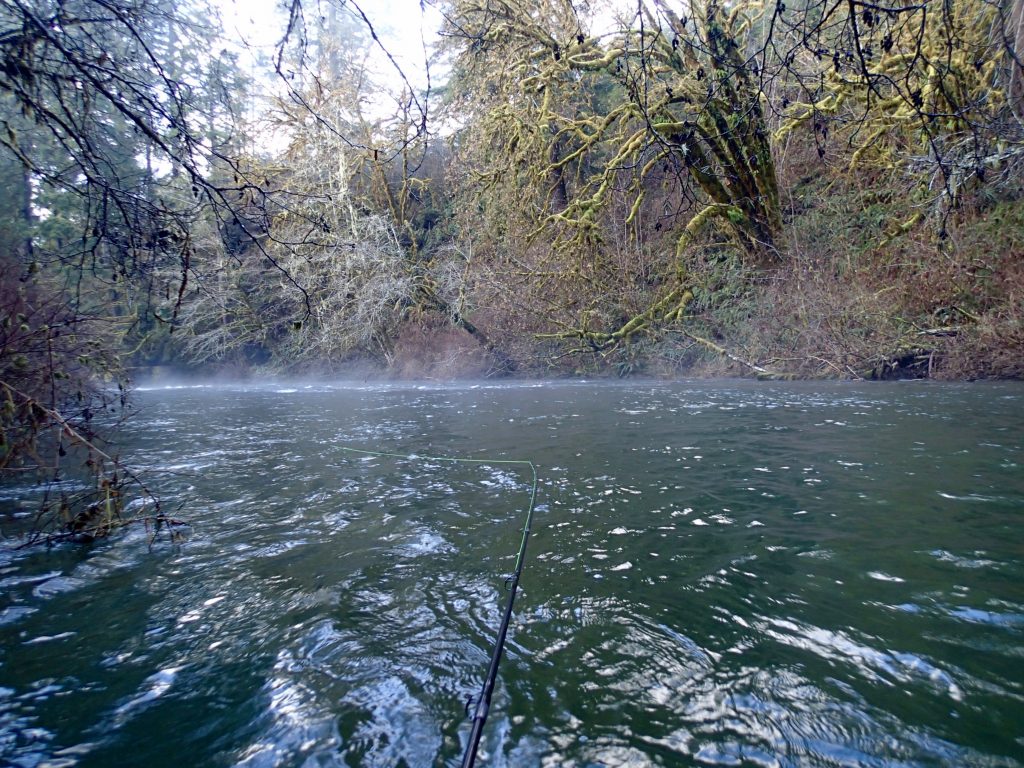 Day 1: Moments of brilliance combined with moments of frustration. I had lots of blown anchors and pile casts. This head is short. The sweep to a d-loop formation has to be a lot shorter in order to keep that loop where it needs to be. Easier said than done! But as the day progressed, things started to come together. My “Aha!” moment occurred when trying to throw a “pancake” style cast to the far bank under overhanging branches. I realized that laying the d-loop down towards the water at 40, 50, or 60 degrees, (instead of closer to 90) gets the bottom of the loop to stay low, allowing the line to jump out in nice, tight loops. I’ll need some more time with this line.

Day 2:  Things are coming together. Single spey style casts started to lay out effortlessly with very little backcast room necessary. I call them single spey because there’s no need to keep the rod continuously loaded. Pick up the line, lay it down in your cast direction and roll cast it out. The short powerful head does the work, throwing 10’ of T-14 and a lead eyed fly across the small river with little effort.

My switch rod is my “small water workhorse.” Small coastal waters are often choked with brush down to the waters edge, and into the river itself. A small, swollen winter creek has very few easy casting gravel bars. But you know you want to get under those cedar branches on the opposite bank. There’s got to be a steelhead in there! And this is where the Commando head does things other lines can’t. Unorthodox but effective, a “pancake” style cast with the Commando can easily get under that low overhanging brush, upping your chances at a fish.

I bumped down in grains from the standard 20’ head @480 grains to 350 and 375 grain Commando heads. The 350 was my favorite and is perfect for these situations. I don’t know if I’ll ever use another head on this rod!  Alright, I’ll probably still use other lines on this rod because its fun, but this head will definitely be in steady rotation.

I wouldn’t describe the line as delicate, it’s a hammer. The taper is actually at the running line connection, there is virtually no taper at the terminal end where it attaches to the tip of choice.

Also be sure to check your heads when attaching. OPST has had some labeling issues like marking the wrong end of the line as the connect-to-reel end, and the laser grain etching on the wrong end. But I do believe those issues have been addressed and remedied.

The OPST Commando Head. Give one a cast if you get the chance. It might be your new favorite.